Series: Virginia Bluebloods, Book One
Genre: Erotic Romance
Publisher: Blushing Books Publication
Publication Date: April 9, 2016
Add to Goodreads
Eve Sawyer had a bright future ahead of her when a tragic accident costs her everything. Now, twelve years later, desperation for all she has been missing compels her to seek comfort and pleasure in the arms of strangers. A few hours indulging in anonymous sex with a man named Nate gave her more pleasure than she ever dreamed possible; unfortunately past experiences with men hadn’t given her any hope that night could ever lead to anything more. After meeting Nate again and succumbing to his erotic coercion to enter into a sex-only affair, she soon discovers all the different ways a man with a creative imagination can give a woman with limitations the exciting, pleasurable adventures she has been craving.
Nate Radcliff never had trouble forgetting a woman once he left her bed until he spent the night having sex with a woman who insisted on keeping her name a secret and her face hidden in the dark. A few weeks later, a chance encounter has him coming face to face with the woman he has been obsessing about, and with the fact she is blind. Immediately struck with admiration for the lengths Eve is willing to go to brighten her dark world, he becomes determined to give her the adventures she craves.
For weeks Eve basks in the decadent pleasures and adventures both Nate and his friends give her, making sure she keeps her heart guarded from hoping for more, even when Nate insists their sex-only affair has grown into something more for him. But Nate wasn’t one to give up, especially when he wanted someone as much as he wanted Eve. Just when his persistence starts to pay off and Eve becomes open to a future with him, her best friend, Holly, returns to town, her jealousy and possessiveness threatening to drive them apart. Eve refuses to believe anything bad about Holly, the only person who has stayed faithfully by her side through thick and thin, which drives a wedge between her and Nate. In the end, Eve’s refusal to see her friend’s true motives comes close to not only costing her the man she loves, but to costing her life.
BUY NOW!
Get your copy of BLINDSIDED today.
Available at:
Amazon | Barnes & Noble | Blushing Books

Eve welcomed the warmth of the afternoon sun after the chill of hearing that voice again, the same low, rugged voice that sent shivers up her spine and heat pooling between her legs that she could not forget this past week. She knew from the tone of his voice when he whispered his name he knew who she was, but she didn’t understand how he knew and she wasn’t waiting around to find out. Now that he had discovered part of the reason she was desperate enough to seek sex in such a manner, she figured he’d be only too happy to run as far from her as possible, eager as she was to put some distance between them.

Eve struggled to swallow back a groan of unease. They managed to get to the parking lot before he caught up with them and her hopes of making a clean getaway from the man she spent the better part of a night getting naked with plummeted.

“Eve?” Carl looked from her pale face to the determined glint in Nathaniel’s eyes, wondering what was going on between them.
“It’s all right, Carl. Give me a moment to speak with Mr. Radcliff please.” She waited until he squeezed her arm and heard him walk away before turning around. She didn’t need to see him to feel his presence standing so close their bodies brushed. Taking a step back, she came up against the warm metal of Carl’s car. “What can I do for you Mr. Radcliff?” His reply dashed her hopes that using his last name would make him think she didn’t remember him.
“I would think, Ms. Sawyer, that after spending several hours heating up the sheets together, you’d know me well enough to call me by my first name.”
“Fine,” she snapped, not interested in trading barbs with him. “What is it you want, Nate?”
Nate braced his hands on the top of the car behind her, caging her in. “I want to know why you were there last week.”
She shifted uncomfortably, uneasy with her body’s reaction to his closeness. It wouldn’t do to let him know how last week’s encounter plagued her all week, how she had lain awake at night reliving each touch, each orgasm, until she was pulling out her vibrator, attempting and ultimately failing to achieve the heights he had driven her to.
“I suspect,” she answered, “for the same reason you were, a few hours of anonymous, uncomplicated sex.”
“And how long will that night satisfy you? A week, a month, before need and desire sends you back to that room?” His perverse insistence stemmed from wanting to know if she’d spent the past week as frustrated with their anonymity and the desire for more as he had.
His brash question had her face warming. He’d probably find her pathetic if he knew she already craved a repeat performance. For the first time in five years, her desire to return to the Hampton and indulge in sex with a stranger had nothing to do with the anniversary of the devastating loss of both her high school sweetheart and her sight. “That’s none of your business, or your concern. Now, if you’ll excuse me, I need to get going.”
Nate took a reluctant step back. He had no idea why he couldn’t let it go, let her go, all he knew was he had never been intrigued by or drawn to a woman with such a strong pull before. Discovering her blindness answered a few questions, but raised several more, like how often did Camille set her up and how had she found the courage to attempt rock climbing blind? Never one to run from a challenge, he persisted by changing the topic.
“Why rock climbing? I’d think you’d have enough challenges to cope with without adding to them.”
Eve’s first reaction was to snap back again that it was none of his business, but she wasn’t used to people, especially men, being so open and inquisitive with her. Most people tiptoed around her, coached their remarks and avoided any mention of her blindness. Nate’s blunt curiosity bordered on rudeness, but she enjoyed the refreshing novelty of it even though she had no intention of encouraging him.
“I enjoy engaging my mind and my body with new challenges,” she replied, leaving it at that. “Now, I really must go. Carl?”
“Right here pumpkin. Mr. Radcliff,” Carl said, holding out his hand. “It was nice to meet you.”
“Same here,” Nate murmured as he watched them get in the car. He hoped being able to put a face and a name to his mystery woman ended this ridiculous infatuation he had developed.

Other Books in the Virginia Bluebloods Series

Also check out other highly recommended titles by BJ Wane.
Here are Books 2, 3 and 4 of the Virginia Bluebloods series.
Bind Me to You
Virginia Bluebloods, Book 2
Camille would do anything for her nephew, including going to a sex club under false pretenses. Dec couldn’t forget Camille after one brief meeting, but distrusted the woman who gave him her body but held back everything else. Would she wait too long to tell the truth, risking everything?
Purchase Links: Amazon | Blushing Books

Surrender to Me
Virginia Bluebloods, Book 3
Suffering from OCD and guilt over her husband’s death, Shea accepts Master Fin’s dominance to help her cope. Fin is drawn to the woman who needs his painful discipline but refuses to give him anything in return. When the truth comes out, will Shea have risked her newfound happiness for nothing?
Purchase Links: Amazon | Blushing Books 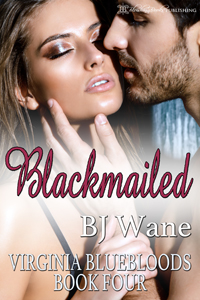 Blackmailed
Virginia Bluebloods, Book 4
Charlotte can’t ignore Wes’s coercion into an affair after their one night together. But their pleasurable trysts make her question whether she can accept the future her cousin has planned for her, leaving her craving only Wes. When Wes turns on her, she vows to take control of her future.
Purchase Links: Amazon | Barnes & Noble | Blushing Books 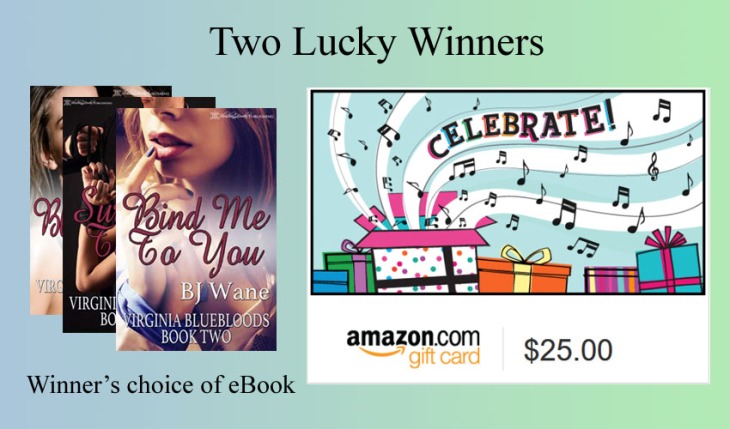 a Rafflecopter giveaway
– – – – –
Get your copy of Blindsided today. Available at:
Amazon | Barnes & Noble | Blushing Books

I live in the Midwest with my husband and our two dogs. I love dogs, enjoy spending time with my daughter, babysitting dogs and kids, reading and working puzzles. We have traveled extensively throughout the states, Canada and just once overseas, but I much prefer being homebody. I worked for a while writing articles for a local magazine but soon found my interest in writing for myself peaking. My first book was strictly spanking erotica, but I slowly evolved to writing erotic romance with an emphasis on spanking. My favorite genre to read is Romantic Suspense.
Contact BJ Wane: bjwane@cox.net

Join the book tour! Get more tidbits, excerpts and other info on Blindsided by visiting each tour stop in the schedule below.