Twenty-five year old Oliver Honeycutt has no idea how handsome he is. He’s creative, brilliant at his job, and underused in the designer fashion store where he works. Behind the scenes, Oliver takes special care with orders for customer, rock star, Zane Highwood. When Zane is to be the main attraction in the store’s Christmas party, fashion show, Oliver hopes Zane will notice him.

Multi-millionaire, twenty-five year old, Noah Somersby, made his first million before he was twenty-one and now owns a number of casual-chic menswear stores. He’s a designer, gorgeous, and desperate to find a man who will love him for himself and not see dollar signs as they kiss.

Noah doesn’t often take the train into the city, but one rainy day he does, as he settles into a seat opposite Oliver, the two men exchange interested glances.

In fact, Noah is super attracted to Oliver and Oliver thinks Noah is gorgeous.

As the store holiday season party approaches, can serendipity bring them together? 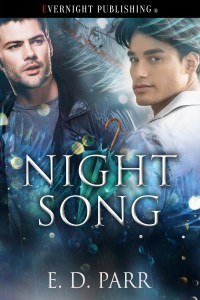 Noah Somersby took a late train to the city. He regretted it because it meant he wouldn’t see the hot guy who often ate a pastry and always drank coffee as he traveled on the early express. Detained at home by a phone call from one of his stores in another state, Noah addressed the problems reported to him before he left to visit the store on Main Street. Noah owned two stores in the city, and the Main Street branch was currently hosting a charity event. He stared out the train window at the downpour and sighed. Noah favored white Christmases, and this year would definitely not be one. The forecast for the weeks ahead was for rain, wind, and fog—thoroughly depressing.

Noah’s thoughts wandered back to the handsome man who’d caught his attention a few times. He’d given the guy his best, “Hi, I’m gay. I’m interested,” look, but there’d been no answering stare. Instead, the man had quickly looked away on two occasions, causing Noah to question if he’d misread an early interested glance his fellow traveler gave him.

Noah sighed. He hadn’t met anyone who stirred his heart for over a year. The last two dates he went on ended badly with both he and the guy he’d gone out with deciding they weren’t really into each other. Noah wasn’t a one-night stand person. He loved sex, but he wanted to feel a connection with a man before they engaged. Just the sight of the handsome man who rode the early express train did something to his heartbeat. Noah decided that the next time they were in the same car he’d talk to the guy.

He joined the rest of the late commuters exiting the train onto the wet streets and strode to his store. Noah had built his menswear empire with casual-chic fashion and made a million before he was twenty-one. Now, four years later, he designed most of the collections, although recently he’d employed two newly graduated designers to take some of the load.

Noah dashed up the back stairs, leaping the double banister and landing on the next flight to the second-floor office. He dragged off his wet coat, smiling to himself at his short indulgence in parkour. I kinda miss running and leaping through the city… He’d forgone an umbrella that morning and his hair dripped with rain. He unwound his scarf and draped it over the back of a spare chair near the radiator. He hung his overcoat across three hooks on the wall coat rack and stared at it, willing it not to fall off and to dry quickly.

Noah went into the private restroom attached to his office and grabbed a number of paper towels from the dispenser near the sink. He blotted the water from his hair and then pushed it away from his forehead. Noah washed his hands, then aimed the towels at the recycle bin as he went out the door.

On launch discount at Evernight only https://www.evernightpublishing.com/night-song-by-e-d-parr/

Or find this gay romance on All Amazon sites http://mybook.to/NightSong 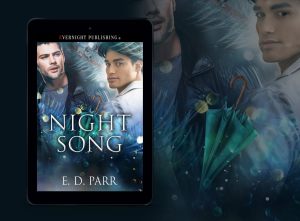 Do you try more to be original or to deliver to readers what they want?

I write stories that pop into my head and hope that they will resonate with someone. I’d love to think that the love stories I write are what readers want. I don’t think there’s enough love in the world, but even so, my stories are character driven. I always have a happy ending. We all deserve one.

I like to think there’s originality in my work. When I look at the body of my work I see originality within the story plots, but the theme of finding love is always there.

Do you plan all your characters out before you start a story or do they develop as you write?

I never plan my characters, but they’re there before I start the story. Somehow, I just know them. I generally love them, even if one or two of them are flawed. I think that’s a realistic portrayal of people. Who’s perfect after all and as long as they redeem themselves a little that works for me. They do develop but never stray from their initial imprint in my imagination.

What would you like readers to enjoy most about Night Song?

Well the heroes as characters, of course, the love scenes, and the way Noah persists in seeking out Oliver, but I’d love readers to enjoy the humor in the story, and the camaraderie between Oliver and his co-worker, Eddie. That’s where lots of the humor lies.

What are your upcoming projects?

I have an MM romance Sci-Fi releasing from Evernight Publishing January 21, 2021. It’s titled, Love in Danger.

The story is a gay romantic horror, heavy on the romance/love story between the two main characters to offset some of the Sci-Fi horror elements. I loved writing this story because for once, the lovers had already met and we meet them together as partners. I usually write stories that have the characters meeting and falling in love s this was a refreshing change for me as a writer.

Here’s the blurb for Love in Danger

Centuries ago, the planet they cherished was conquered, but now three warriors from an ancient race of gifted beings intend to remedy that.

Lovers, handsome Corin JaKobi and gorgeous Marcus D’Ath are members of an elite planetary squad that rid the city sectors of the mysterious and dangerous Fallen.

When an old friend uncovers the true horrific nature of the elders in the organization they work for, anger at their duplicity drives Corin, Marcus, and rogue squadron hunter, Zeb to plan for the ruling group’s demise.

It won’t be easy, and when Marcus is captured and detained at the elders’ pleasure, Corin’s white-hot fury at the thought of losing the man he loves knows no bounds.

Will Corin get to his beloved, Marcus, in time to stop the horror that awaits him?

Can the warriors free the planet and return it to the lovely place it was before the aggressors arrived?