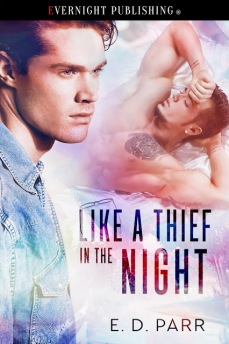 Gorgeous, businessman, Saxon Dearing buys a pied de terre in the city where he works. Only using the place on three nights, he goes home to his beachside house for the rest of the week. At thirty-two, immersed in his work, he doesn’t know he’s lonely until delicious, twenty-five year old Jon Palmer literally drops into his life during a thunderstorm.

Artist Jon struggles to sell his paintings from a tiny studio, and works in a city gallery to pay his rent. As the two men fall in love, Jon can’t overcome the idea his lack of success is a barrier to telling handsome, wealthy Saxon how he feels.

When his boss offers him a dangerous way of making money, Jon must make a choice.
Will he risk telling Saxon he loves him or let his lack of confidence lead him astray and away from the man who loves him, too?

Read a teaser
The invitation to kiss lured Jon in a second. The delicious feel of his lover’s lips mingled with the emotion that swished in his stomach. He clung to Saxon, sharing heated kiss after kiss until his heart raced. He drew away trying to cool the moment.
Saxon traced a finger along Jon’s cheek to his jaw. It left delectable sensation in its wake.
Jon took a deep breath. He returned to sitting in the shelter of Saxon’s arm and stared at the screen where the movie played on.
Moments passed before Saxon spoke softly.
“I know you go home Saturday after work, but can I see you tomorrow night? Will you come to the beach house? I know it’s clingy, maybe even surprising, but I feel like I don’t want to let you out of my sight.”
The sentiment sent a wave of warmth into Jon’s heart. If only things were different, we’d fall in love. I already feel safe with him. I want to love him and have him love me. He won’t love a felon. Jon sighed.
Saxon must have mistaken the sigh for a refusal. “You probably have plans, of course.”
Jon hurried to correct the idea. “No. I’d love to see you, Saxon.”
“Where’s your phone? I’ll put my address and both my numbers in your contacts.”
Jon couldn’t help smiling. He likes me a lot, for sure. He stood and went to his jacket. He brought his smartphone back to the couch and sat beside Saxon. “Here you go.”
Saxon bent his head to key in the information.
Just watching him gave Jon a soft glow of affection for the man.
Copyright E. D. Parr 2019 Evernight Publishing
Buy the Book
Save on new release special discount price Evernight Publishing only
Amazon US  *  UK  *  Canada
Universal Amazon Link
KOBO
NOOK
Siren Bookstrand
Find the author
Twitter
Website
Facebook
Find the author’s books
Evernight  *  Amazon  *  Siren BookStrand  *  Smashwords  *  KOBO  *  NOOK